I was so excited to show my children the original How the Grinch Stole Christmas, which has long been my absolute favorite Christmas movie. But, the nature of toddlers being what it is and in the current era of on-demand content, I was, perhaps, not prepared for how MANY times I would watch that movie during the Christmas season.

Around the seventh time we watched it, a question arose that has become lodged in my brain and is all I can think about during the next 993 viewings. Go with me here.

We first see Cindy Lou when a tiny Who waiter walks out of some sort of nesting doll service situation and offers her a strawberry on a silver platter. OK, this Who is obviously very tiny, but we know how big a strawberry is, right? So from this, one would think that Cindy Lou is basically the size of a small one year-old child. 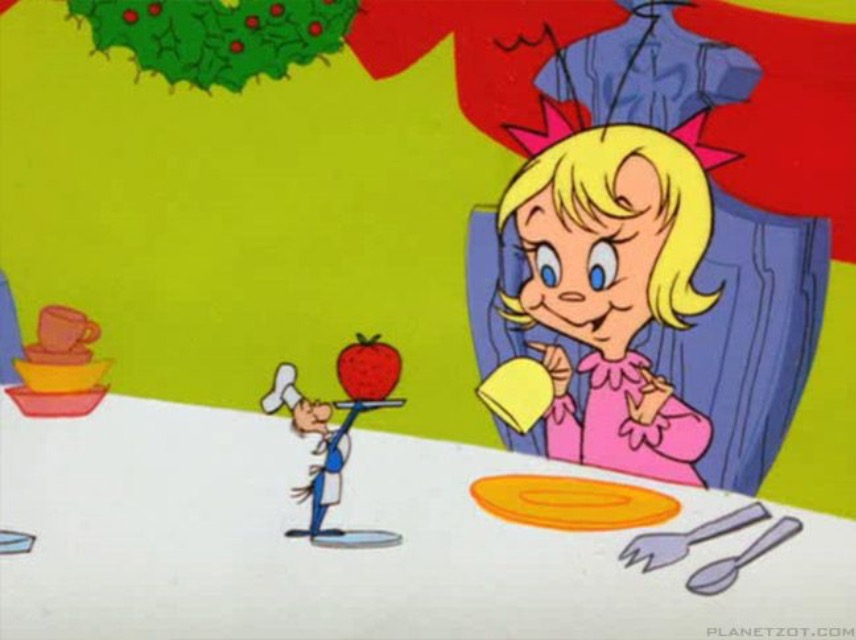 The next time we see her, she's in bed next to a very long candy cane. This doesn't help with scale, but based on the Grinch's hand size, we have no reason to believe that there's anything that unusual about her size. The previous perception (a small one year-old) stands. And the next time we see that exact ornament, it is being held by Cindy Lou who is suddenly, apparently, seven inches tall! OK, so I know what you're thinking. All right, big deal. We know that Whos are very small, and so maybe it makes sense that they're actually about the size of Christmas ornaments. But then wouldn't they have smaller ornaments? In what universe would it make sense to decorate your home with a GIGANTIC tree and ornaments that are almost as big as your children??? By that logic, the Whos live in homes that are wildly out of proportion to their own size. Why??

And THEN at the end we see Cindy again, this time next to Max, and they are roughly the same size.

So you're telling me that a dog that is SEVEN INCHES tall could pull a sleigh with all of the Whos belongings - including those GIGANTIC ORNAMENTS??

There's no way. It is not possible.

Anyway, thank you for coming to my TED talk.

The Question that Breaks My Brain Every Christmas
December 23, 2019

Five Foods to Bring to Your Next Holiday Party to Let People Know You're in the Middle of a Breakdown
December 13, 2019

Five Non-Political Family Fights to Have This Holiday
November 28, 2019